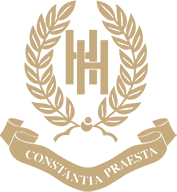 Holmewood House School is full of history. In 1827 Decimus Burton, famous for many buildings in London (including the archway at Hyde Park Corner) and in Tunbridge Wells, designed and built a house in classical style and called it Mitchells after a Tudor farmhouse that had once stood on the site. Sadly in 1837 the building was destroyed by fire, but it was rebuilt and given the name by which we know it today – Holmewood House.

The House at first belonged to Sir Charles Locock, who was gynaecologist and physician to Queen Victoria. It was sold in 1850 to the Barrow family who used it as their country home until the 1930s. In 1939 The Hill School for Girls moved for a short time to Holmewood from Westerham.

Holmewood House Boys’ Preparatory School was founded during the autumn of 1945 by John and Mary Collings and Andy Trotter, and it began with just eight pupils. When the school first opened the world was vastly different, there was still rationing and school equipment was very scarce. The seams of soccer and cricket balls were frequently re-sewn by hand with fishing line, and the staff were not paid until the end of each term. The boys enjoyed listening to ‘Dick Barton, Special Agent’ on the wireless loudspeaker system which was wired through to the dormitories.

By 1950 there were 100 boys in the school and a waiting list that stretched into 1956. By 1970, Holmewood’s 25th year, numbers were over 350, necessitating a huge building programme of new classrooms, long-awaited assembly hall and music rooms. The first five year olds joined the school in 1978 when the Pre-Prep department was started.

The end of the eighties was another momentous time for the school, as 1989 would be its last as an all-boys’ school. After only two years, the 100th girl arrived at Holmewood, and the neighbouring Knowle Court School was purchased, soon to be re-opened as the Pre-Prep department.

During the nineties, Holmewood became a fully co-educational day and boarding preparatory school. Set in 30 acres of beautiful countryside on the Kent/Sussex borders, the school boasts outstanding facilities, including a 360-seat theatre, a purpose-built music school, a magnificent sports hall, a TigerTurf all-weather pitch with athletics track, an indoor .22 calibre shooting range, squash courts and a wonderful indoor swimming pool.

In July 2010, Andrew Corbett retired after twelve years as Headmaster and James Marjoribanks took up the helm, to be succeeded in September 2017 by Scott Carnochan.

At the start of the Autumn term in September 2011, the first lessons took place in the Collings Building, our state-of-the-art classroom block, and in 2017 the Cloisters building, incorporating eight more classrooms, two computer rooms and a learning hub, opened.

We would be delighted to hear from you and invite you to contact us for any queries you may have. You can reach us on 01892 860000, via email at [email protected] or by filling out this contact form to request a callback.